The strategic goal of «Ekibastuzteploenergo» LLP is a part of the strategic goal of its parent company, «PAVLODARENERGO» JSC, and reads as building an enterprise, which is able to ensure a well-balanced and sustainable heat supply to the city of Ekibastuz. The Company enterprises carry out their business activity in accordance with the international standards and requirements in the field of energy production, environment, health protection and social responsibility.

The key focuses in achieving the strategic goal of «Ekibastuzteploenergo» LLP are the following:

To achieve this strategic goal, the company fulfils the following tasks:

reconstruction and modernization of the equipment through the implementation of investment programmes aimed at reducing damage rate, eliminating equipment downtime and renovating the company’s basic capital funds; decreasing extra losses during heat energy transportation; introduction of energy-saving and energy-efficient technologies at the stage of heat energy production and transmission; up-to-date certification maintenance in compliance with the international standard requirements in the field of ecology, health protection and industrial safety.

Ekibastuz CHP was built in 1956 when it became the first combined heat and power plant in Pavlodar Priirtysh’e (the regions on the Irtysh River). Since that time and nowadays the station has been the only source of heat supply to the city of Ekibastuz with a population of 143 thousand. The installed electric capacity of Ekibastuz CHP is 12 MW, the installed heat capacity is 782 Gcal/h.

Currently, the station is undergoing modernization and reconstruction; overhauls and current repairs of the main and auxiliary equipment, buildings and constructions are carried out according to the approved schedules.

In April 2009, turbine #1 with the capacity of 12 MW was put into operation. The turbine unit is primarily designed to cover a significant share of the station’s own electricity needs.

The company makes major efforts at Ekibastuz CHP for implementation of the environmental policy of the government of the Republic of Kazakhstan, which is aimed at the sustainable reduction of environmental emissions. The reconstruction of boiler units ## 5, 6, 7, 8 and 9 with the installation of battery emulsifiers of the second generation was carried out at the station. This allowed increasing the efficiency of flue gas purification from ash from 97% up to 99.5% and reducing ash emissions by 10% of the total volume.

The automated system for commercial accounting of power consumption (ASKUE) has been put into operation at Ekibastuz CHP.

After thorough reconstruction, a renovated boiler unit #6 was put into operation in 2014. The boiler capacity after reconstruction reached 90 tons/h, and its efficiency increased from 88.5% up to 90%, which led to reduction in NOx emissions. During its reconstruction, the boiler unit was equipped with a fully automated process control system.

Stack #3 was reconstructed in that same year 2014 as well with the complete replacement of its inner lining. That was the first time when a project on this scale was implemented in respect of the stacks of Ekibastuz CHP.

Currently, the second stage of the station’s ash dump is being constructed. This will ensure reliable operation of Ekibastuz CHP with a timely, uninterrupted and cost-efficient removal and storage of ash and slag in the ash dump.

The company «Ekibastuzskie Teplovyie Seti» was established in 2007. The enterprise provides services for heat energy transmission and distribution to the consumers in the city of Ekibastuz.

The length of Ekibastuz heating networks is 422 km (taking into account the consumers’ networks):

During the period of 2010-2015, 1.2 km of distribution heating network pipelines with a diameter from 32 mm up to 200 mm was reconstructed in Ekibastuz, while some of those pipelines were increased in diameter and equipped with energy-saving polyurethane foam insulation.

In 2016, an agreement was concluded among the European Bank for Reconstruction and Development, the Ministry of National Economy of the Republic of Kazakhstan and subsidiary companies of «CAEPCo» JSC within the Nurly Zhol program (a governmental infrastructure development program). This agreement allowed implementation of an unprecedented major investment programme of modernization of the heat supply systems in Ekibastuz. The project scope exceeds the total scope of works for reconstruction and modernization of the heat networks in this city of miners for the previous decade; this time the work covers almost 29 km of networks. 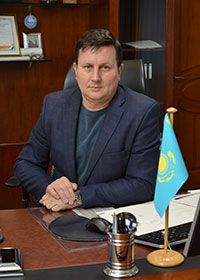